I have just had a writer’s dream trip – a sashay through New York City for a week, a few days in Los Angeles, and now four days in San Francisco. In each place I met the most interesting people, not to mention walking around with face turned skywards marvelling at the architecture in New York… 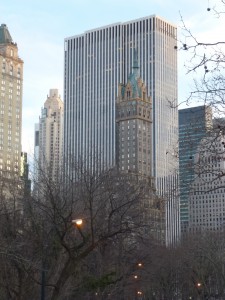 The old, the new, the built and the natural, all in harmony

My sister Leonie and I flew to the US for her son Liam’s movie premiere in LA, preceded by a Cosmopolitan magazine dinner in New York. ‘We can spend a whole week in New York – you’ll love it!’ she assured me, and she was telling the truth. I’ve never been a fan of cities, but New York claimed me instantly. It’s huge and overwhelming but very much a human-scaled city at the same time. The juxtaposition of the very old and the practically futuristic never jars the senses. Visiting “the oldest public building in continuous use in Manhattan”, right beside Ground Zero, was a moment for reflection. 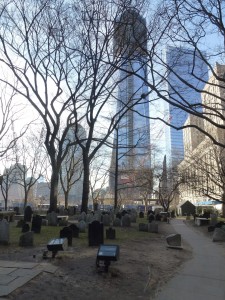 St Paul’s Chapel was built in the mid 1700s, and should seem incongruous beside the glass and steel towers around it, but instead it stands its own ground, and brings them back to our size. Perhaps it’s the weather worn tombstones in the church yard, with dates from the late 1700s, reminding us that we’ll all end up the same way eventually, no matter how many tall buildings we create. 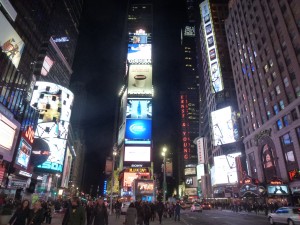 We met “Toast” in a bar on Times Square. He looked like the kind of guy you’d edge away from at first sight, a bit wild-eyed and scruffy with a mouthful of broken teeth, but he turned out to be a genuinely good bloke, and a wildly enthusiastic Thor fan. When he discovered that Leonie was Thor’s mother (Chris Hemsworth is her son too), his eyes bugged out and he turned to the bar and announced, ‘Hey you guys, this is THOR’S MOM!!’ He said he spent years in hospital as a youngster and the thing that kept him going were Thor comics. We were relieved to hear that Chris had “nailed it” as Thor in the movie. He was called Toast because he’d been burned badly as a young child, hence the hospital stays. Growing up, he was a white kid in a black neighborhood. His older brother was nicknamed White Bread, so he was called – Toast! He recommended a lot of great places for us to check out, and then produced tickets to the Dangerfield Comedy club, his workplace. 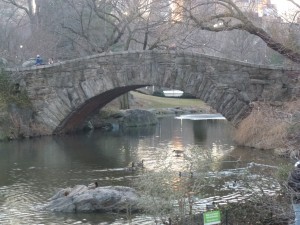 It could be a quiet river in England, but it's the heart of New York. Central Park.

Meeting people like Toast was the essence of New York for me, even more than the magnificent streetscapes and lovely, iconic Central Park. We’d been warned against taking private hire cars by the concierge at the hotel, who said they overcharged, but one night we were freezing on a corner waiting for a cab, and a PH car stopped. If we hadn’t jumped in we’d have missed an enlightening conversation with the Palestinian driver, who eloquently gave his side of the conflict in his homeland, without rancour, and told us how well his kids were doing in America. Plus pointed us in the direction of more things to see. (and no, he didn’t overcharge us!) 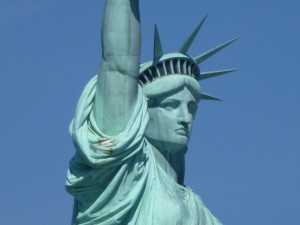 No visit to New York is complete without this lady. I was relieved to find I was impressed and fascinated by the real thing when I finally saw it. It's bigger than you think.

After walking across the Brooklyn Bridge, we wandered around the DUMBO – the area known as “Down Under Manhattan-Brooklyn Overpass” and found a great little Italian restaurant. The owner sat us “beautiful Australian ladies” in the window of his establishment, sent over wine and elaborate desserts on the house, and told us the most hilarious episodes of his own ‘Italian immigrant makes good in New York’ story. Next time we visited, he said, he would take us home to his wife, and cook us some real Italian food. Must be the accent. 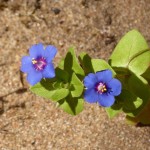