Excerpt from chapter ‘A Lucky Fall’ from Brumby Plains

George had moved around to the far side of the fig tree and was looking up into the branches trying to see the birds more closely, when all of a sudden he gave a sharp cry. Sam and Tess leapt to their feet and ran around to him with Darcy close behind. George was gone. At their feet, where George had been standing moments before, was a hole, and George’s muffled voice could be heard shouting: ‘Sam! Sam! Help!’

‘Quick Darce, there’s a torch in my pack!’ Sam pulled back the bushes which had hidden the hole from sight and tried to make out what was happening below. ‘George? We’re here! Hold on, we’ll get you out!’

George was hanging in mid-air. He had instinctively grabbed at anything solid when the ground gave way beneath him, and his hand connected wit the roots of the fig. He clung tightly to them now, and as he heard the others above him, he stopped yelling, and opened his eyes. He was in a large hole, and there was a light over his right shoulder – he must be in the cave!.

He looked down and saw that he was clinging to a very substantial root which was anchored in the floor of the cave only about three metres below him. The light was coming from the mouth of the cavern, which opened out into a large wide space with a high ceiling, falling away towards the back where it was too dark to see. He looked up again and was blinded the torch beam.

‘George, I can see you. Are you all right?’ Sam sounded desperate. A thousand visions of disaster had already raced across his mind in the twenty seconds it took Darcy to bring the torch. ‘Are you hurt?’

‘I was fine till you blinded me,’ George answered. ‘This is it! I found the cave! I’m going to climb down this root – it feels really strong and it’s not far to the floor. Shine it down below so I can see.’ Before Sam could respond, George had clambered down the root to the cave floor, and stood looking around him.

‘Climb down, you mob – this is fantastic!’ he shouted back up to them.

Within a minute all four were standing in the cave, shining the torch around excitedly. The walls were covered in paintings – fish, kangaroos, crocodiles, all executed in the traditional X-ray style of western Arnhem Land artists.

‘Wow, look at this place! This must be really old!’ exclaimed Darcy.

They examined the paintings in the torchlight. The red and white ochres glowed in contrast to the charcoal black, never having been faded by sun or rain. The figures of men and women dancing seemed to move in the wavering light, and sent a shiver of excitement or apprehension down Sam’s spine – he wasn’t sure which.

‘Why would anyone paint inside a cave where you couldn’t see it? They didn’t have torches then,’ wondered George.

‘I suppose they lit a fire, or held up burning branches or something. A teacher told us at school that the rock paintings weren’t only done for people to look at. They had other purposes too, so it didn’t matter if not everyone could see them,’ said Tess. ‘This is amazing…’

‘There’s burnt sticks and charcoal on the floor just here – look.’ Sam pointed the torch at their feet, and they could see the remains of long dead campfires scattered about. The cavern was big enough to park a couple of cars in, Darcy reckoned, and at its highest was about five metres above them. It sloped down gradually to the front of the cave, but dropped quite sharply at the back.

‘I wonder how far it goes in,’ said George. ‘Let’s have a look.’ He took the torch from Sam and moved further into the gloom. The paintings on the walls were less prolific here and less carefully made. They looked as if they had been done in a hurry. They showed quite different things too. There were lots of depictions of people lying down.

‘Maybe this was a story about a plague, you know, like typhoid or cholera or something, and a lot of people go sick and died around here,’ whispered Tess.

‘George, shine the torch over to your right. There’s something on the floor, against the wall, looks like– hey, look out!’ The torchlight flickered wildly off the walls and suddenly went out with a crack as the torch hit the floor. A black flapping maelstrom filled the cave and the four of them dropped to their knees and huddled as a colony of bats winged past them and rocketed out of the cave mouth, leaving the air heavy with their warm, pungent smell.

‘Oh my God!’ I thought we were dead!’ breathed Darcy as the quiet returned. There were only the scurrying sounds of a few babies left behind, and the pounding of everyone’s hearts.’

‘Millions of bats! Hey, man, the Bat Cave!’ George was full of good humour now he knew his life wasn’t in mortal danger. He hadn’t been so sure when he’d dropped the torch in fright.

‘Yeah, well, steady on Batman, we don’t have a torch now. That was the only one I could find last night and now it’s busted, so we’ll have to go.’ Sam was moving back towards the cave entrance, where the light was stronger. Tess and the others followed, and they climbed back up the tree root into the sunlight at the surface.

They stood looking down at the hole. It was a fissue in the sandstone which the banyan had helped break open further, along with weathering and erosion, to form a ragged-edged hole just wide enough for a slim body to fit through. Bushes and debris from the tree had obscured it from sight until George had plummeted through it. Sam pulled the bushes back across it again.

‘Wow! Those paintings are probably really old and we’ll be famous for finding them!’ Darcy could see his name in lights already.

‘No way,’ said Sam. ‘We’re not telling anyone about this place – not yet anyway. We’re not supposed to be here, remember? Let’s go home. We’ll come back with more torches and stuff and have a good look next time.’ 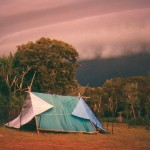