‘What do you reckon about Uncle Mungo chopping that tree up all by himself, huh? He’s a pretty strong guy, hey!’ George was hugely impressed by his uncle’s feat.

Sam just grunted. He didn’t want to talk to George about what he’d overheard, not yet, anyway. He led the way along the top of the dune and was about to slide down the embankment to the beach when something stopped him in his tracks.

‘What?’ said George, looking past his brother, trying to see what he was staring at so intently.

Less than thirty metres in front of them, directly below the dune, a small figure lay a short distance from the incoming tide.

‘We better go check.’ Sam’s mouth formed a grim line as he set off down the slope.

‘Sam, wait! Look out there!’ George pointed wildly out to sea past the body. A familiar and deadly shape was cruising towards the same stretch of beach, the long knobbled back and scarred head of Lumpy clearly visible in the shallow water. His tail moved sinuously from side to side as he swam directly at the shape on the sand.

Sam didn’t stop to think. He snatched up a big rock and charged down the slope, yelling and screaming, and hurled the missile as hard as he could at the crocodile. It hit the reptile fair on the skull with a crack that George could plainly hear, and the crocodile disappeared in a swirl and thrash of foam. George ran breathlessly up to where Sam knelt over the body.

‘George – watch out in case he comes back again.’

He gently turned the body over, and it moaned softly.

‘He’s alive! Quick, let’s get out of here, get him away from the water before that croc comes back again for another go.’

They dragged the small figure up the beach as fast as they could, and then half carried and half dragged him awkwardly up the sandy slope. He wasn’t very heavy. In fact, when they managed to haul him to the top of the dune, they realised he was a child.

‘Oh man,’ panted George, when they’d laid the child in the shade of the big tamarind tree at the camp. ‘Do you think he came from that wrecked boat? What’s he doing out here, and how come he’s sick?’

Sam examined the child as much as he could. There didn’t seem to be any injuries, but the child’s lips were split and cracked. His hands and feet were spongy and raw, as if they’d been in water for too long. Short dark hair stuck up in spikes, crusted with salt and sand. He was clothed in a pair of once-white baggy pants cut off at the knees, and a torn stained T-shirt. He was very thin, and his brown skin was dry and scratched.

Just as Sam sat back wondering what to do next, the child’s eyelids fluttered open. His eyes were a startling green, with long black lashes, and they stared in terror at the two faces that stared back. The child tried to cry out, but no sounds emerged, and he coughed weakly and slumped back onto the ground.

‘Quick George, get the water bottle out of the saddlebag!’

George raced back with the bottle and handed it to Sam. He uncapped it, and offered it to the child, who didn’t seem to understand.

‘Water, water,’ said Sam, and proceeded to tip a little into his mouth.

The child struggled up weakly. Sam and George helped him into a sitting position, and held the bottle to his mouth. The child drank as much as he could and then started to fall again, but Sam supported him with his arm.

‘George, take the seat off the bike – you know how it unclips. He can lean against it.’

They made the child as comfortable as they could. He lay back against the soft cushion of the bike seat and continued to drink sips of water. Sam tried to stop him drinking too much at once. He recalled Mac telling him how people who were this thirsty got sick if they drank too much water too fast. When Sam judged the child had recovered a little, he brought out the packet of sandwiches and unwrapped them. The smell of roast lamb on fresh bread made the child look up, startled and hungry, and he snatched the offered sandwich from Sam’s hand and devoured it.

‘Well, he likes lamb sangers, I guess,’ smiled George. ‘Where do you reckon he’s come from?’

Sam had been wondering this himself. The child had to be from the boat. There was no other way he could have got here.

‘Not sure but I reckon Uncle Mungo’s gunna have a fit.’ 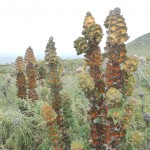