For some reason I always thought the Pinnacles were in the Kimberleys, only accessible by helicopter or by yacht. Instead, they’re a short drive from Cervantes (such a romantic name!) just 2 hours north of Perth. They’re still just as intriguing. And they go for miles and miles. No one really knows how they came to be formed, but there is some conjecture that they’re the supporters of the losing side of a prehistoric AFL Grand Final. The team colours have long since worn away so no one knows which team they were barracking for, although some people swear they can see some black and white. Consequences of losing were harsher in those times. 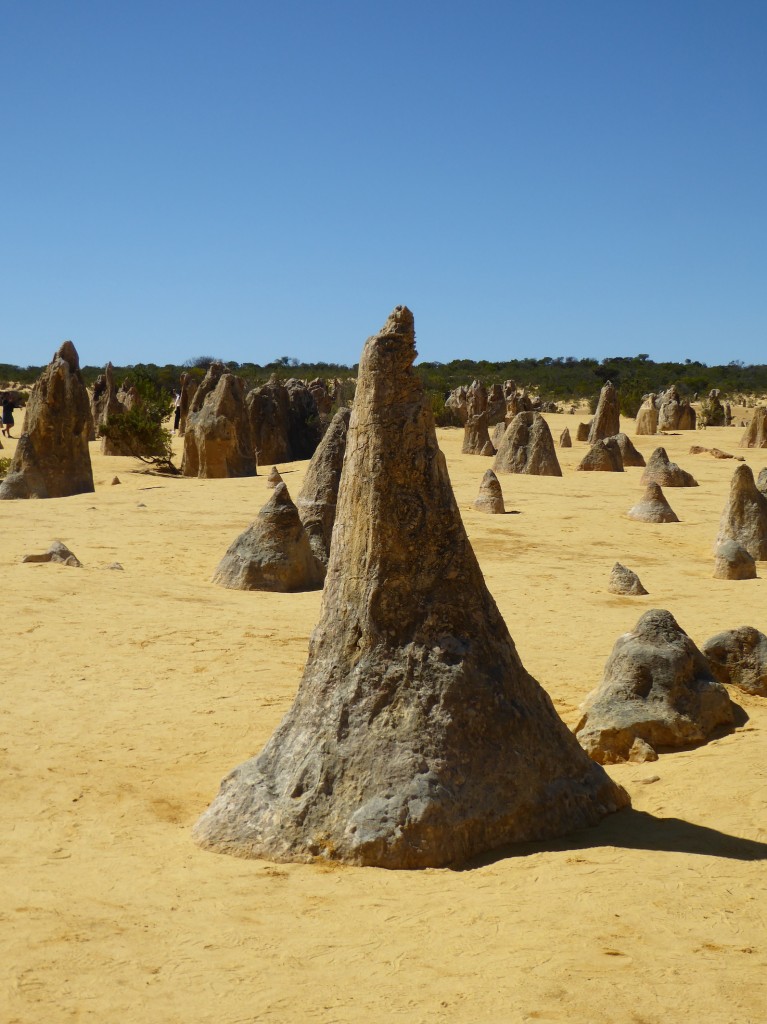 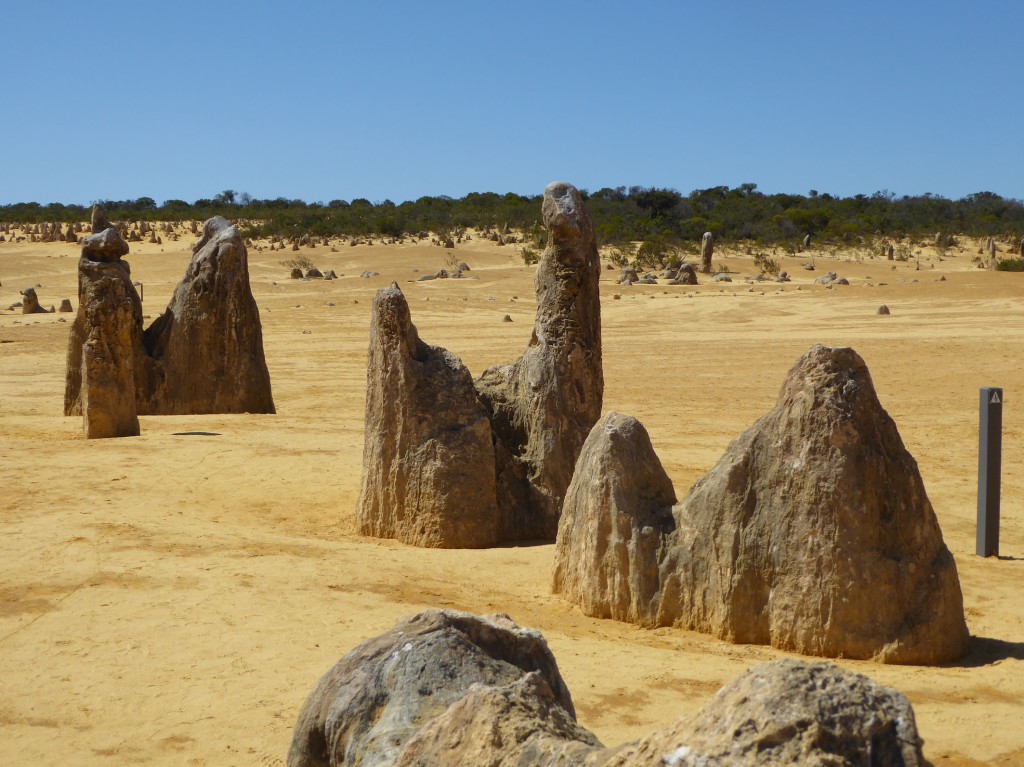 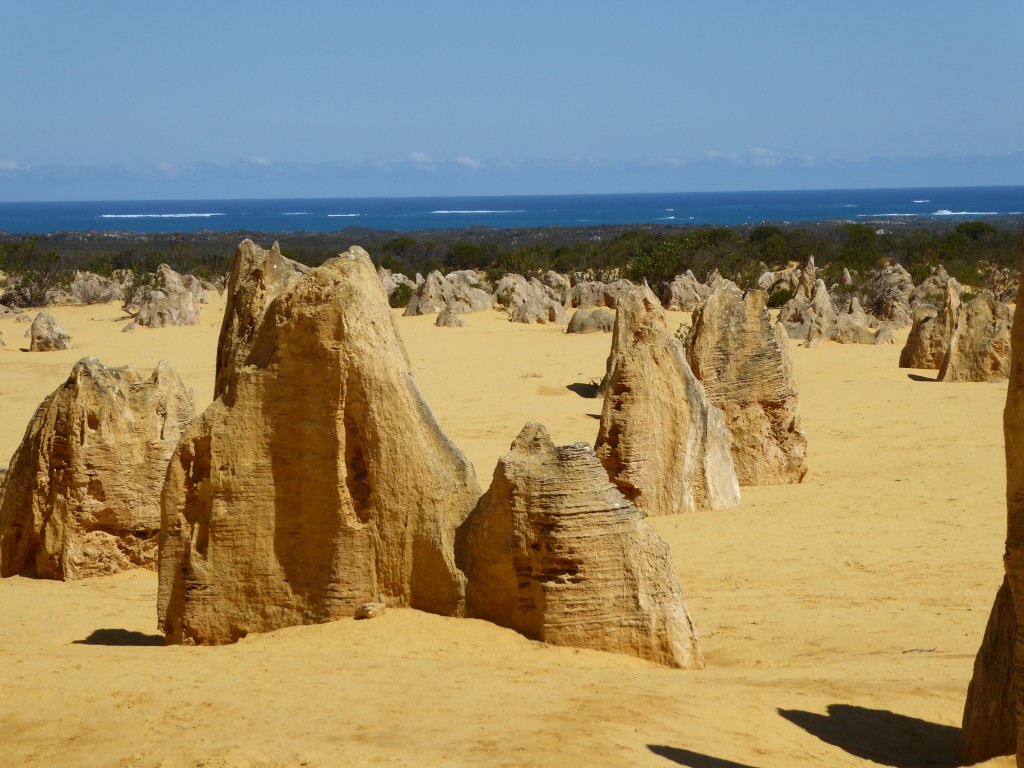 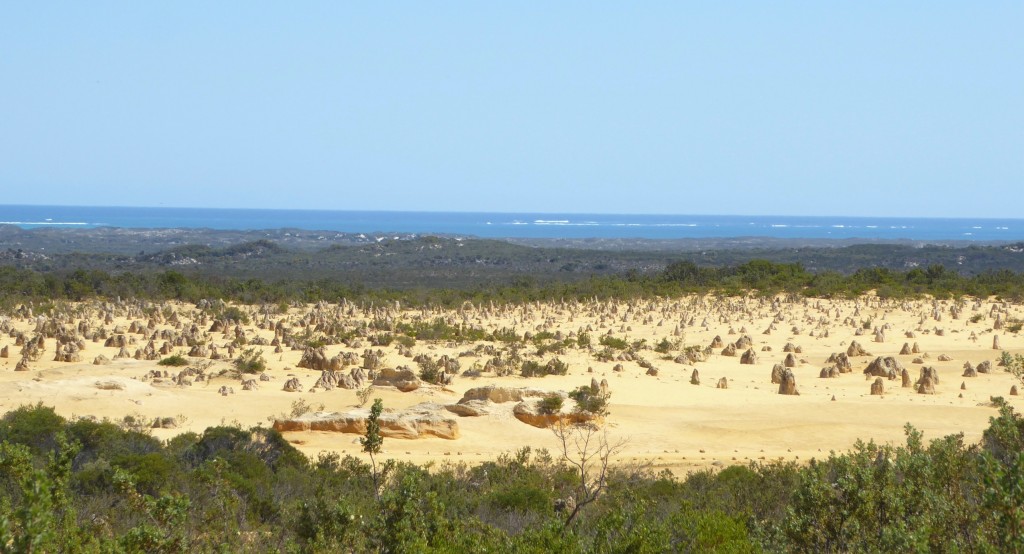 One might wish that people could still be turned into stone, when you come across idiots like this. There are signs everywhere asking people not to climb on the rocks, but it seems the latest visitor fad is not for selfies but to be photographed leaping off things. Seeing it everywhere, like an old Toyota ad gone viral. I think I’m turning into a grumpy old lady. 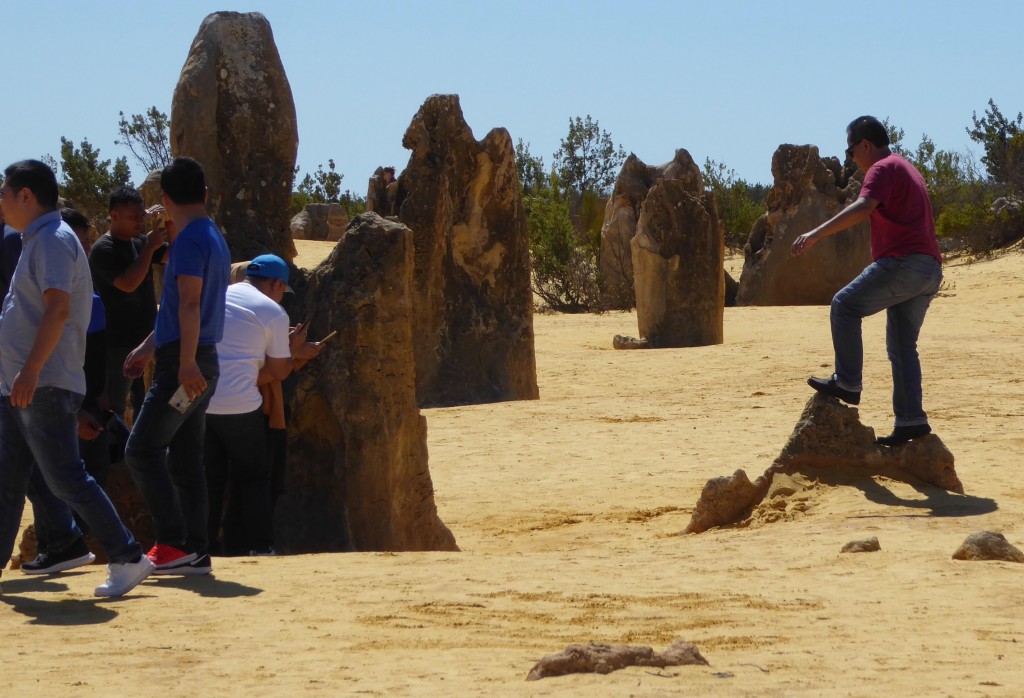 Down to Perth next (where people are leaping into the air all over the place) and a great week with my cousin Gail’s daughter Deb and son-in-law Warren at City Beach, where we gallivanted around the city by day and enjoyed red wine and great conversation every night. So much restored were we that we decided to carry on with our tent, and forget any upgrades. Perth has grown into a beautiful city since I was last here, about 38 years ago. 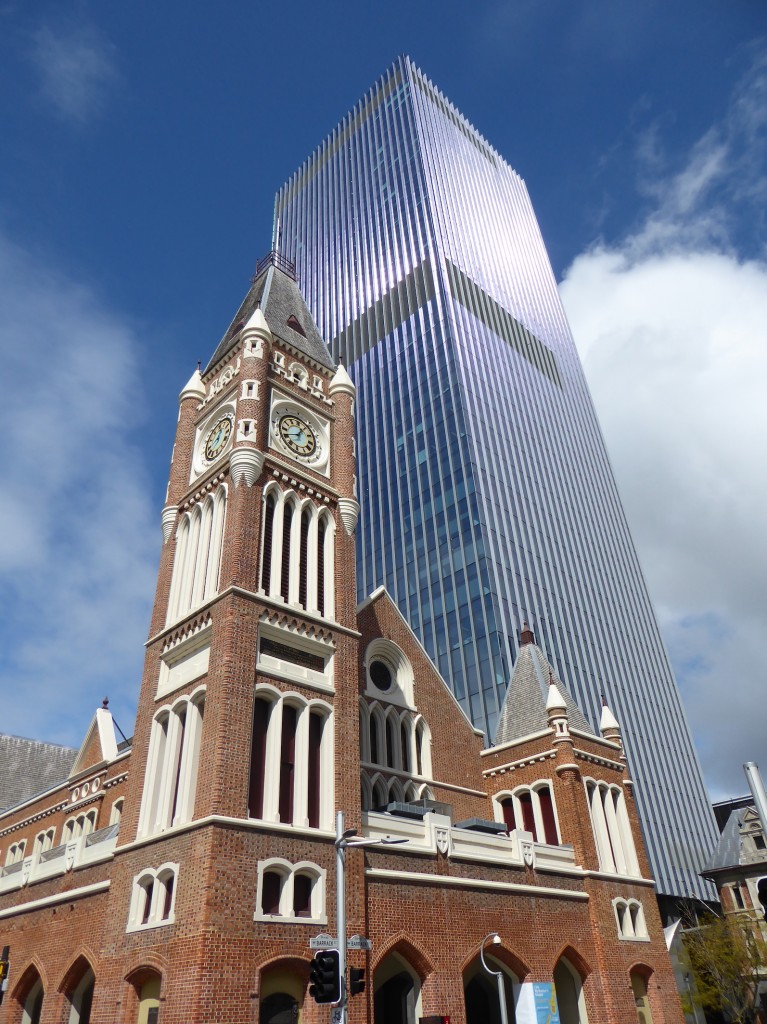 And the old and the new seem to get along pretty well. 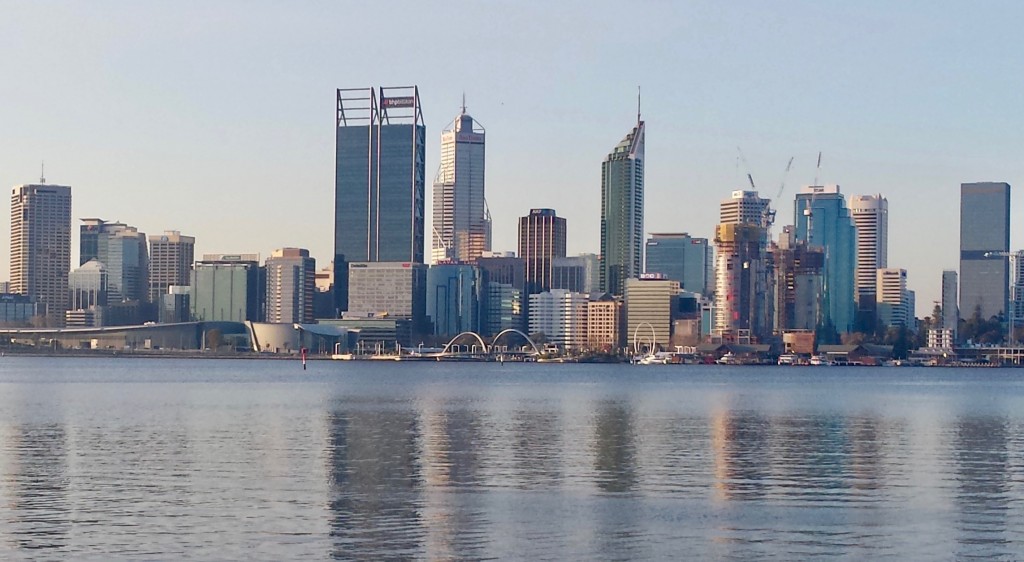 And King’s Park!  More wildflowers. They’ve figured out how to bring the wild into the city and show it off to everyone who can’t get out to the flower trails. It’s a beautiful park in its own right – and not only wildflowers but an amazing transplanted huge banyan (no photo sorry) My cousin Sue met us there, having driven a busload of flower stalkers in from Pingelly, way east of Perth in the wheat belt. Did I mention I have a few cousins over here? 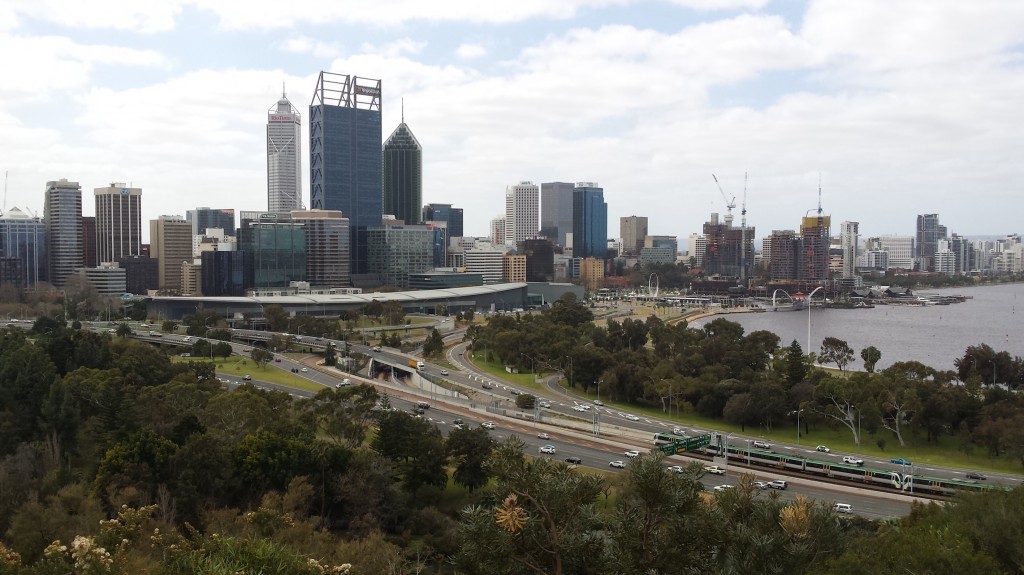 Above is how Perth looks from King’s Park. Would be spectacular on a sunny day!  We also spent a few days at my cousin Maggie’s apartment in South Perth, which meant we could walk to the ferry and boat over to the city from the opposite direction. Fremantle was another discovery – I hadn’t been here before. Love the artwork in the streets: 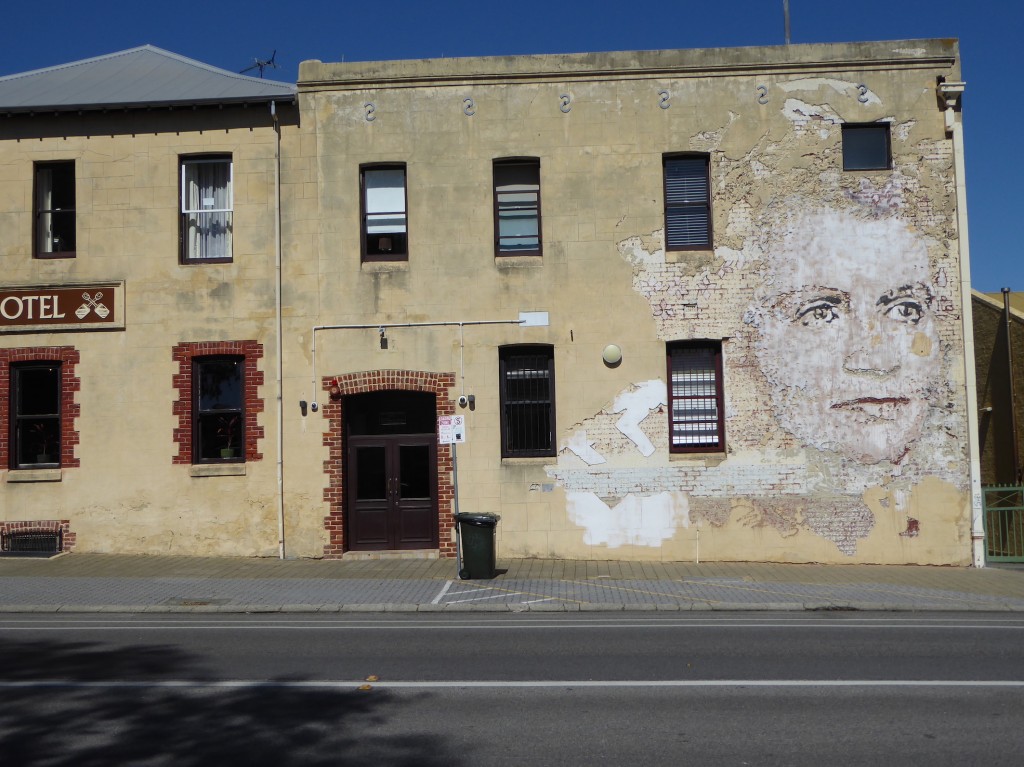 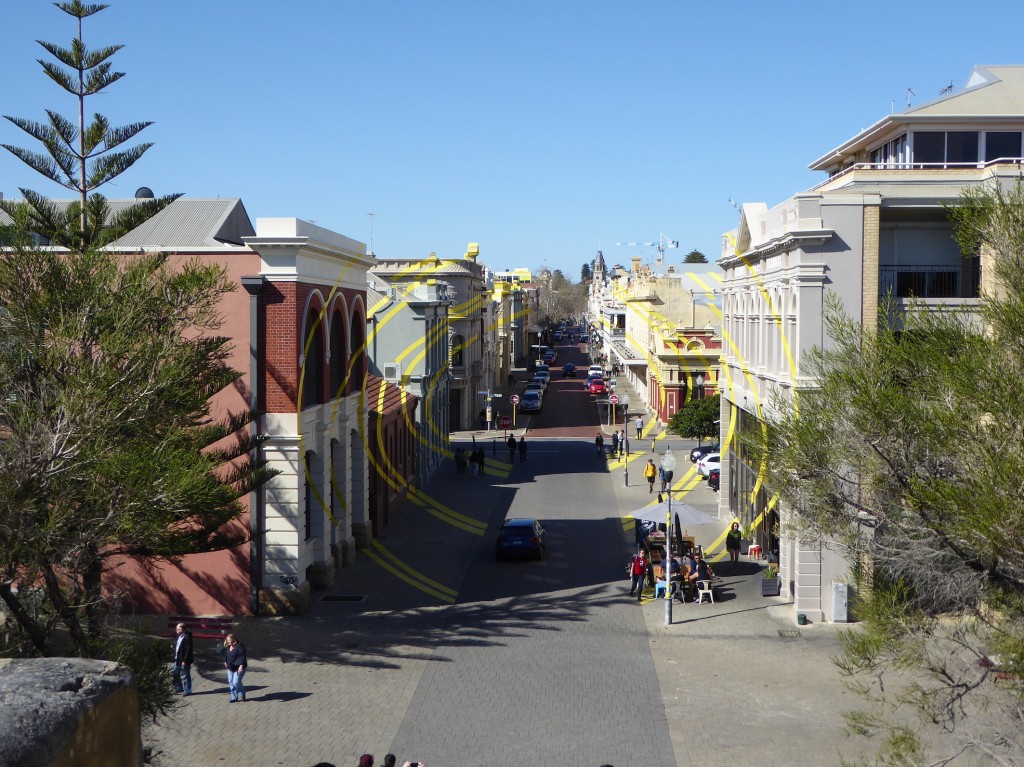 Above is the street view from the old jail – odd! One major reason for visiting Perth was to see my Aunty Pat, who is the last surviving member of my mother’s eleven brothers and sisters. Aunty Pat is 98, almost deaf and blind, but we still managed to have an engaging conversation for nearly an hour. Traces of the dynamo she’s always been are still there. I remember Aunty Pat as this tiny whirlwind shaking up the household on her visits, with her high heels and red lipstick, and a great laugh. So glad I was able to spend some time with her. She’s a special person.

Another person I was able to see in Perth was Rachel Oxenburgh. Rachel and her then husband Richard produced the movie “To Fight the Wild” about Rod Ansell’s survival on the Fitzmaurice River in 1977. We spent 6 weeks on the river in 1978 filming, living in tents and watching out for crocodiles. We’ve kept in touch by phone, but I haven’t seen Rachel since 1980, so this was wonderful. Her daughter Mindy met us there as well, so a double catch up!

Before we left Perth we also caught up with two more of my cousins (did I mention I have some cousins here?) Andrew and Mike and their wives Marilyn and Jenny, at a great restaurant overlooking the Swan River. A fantastic meal and great company, and next day we’re back on the road, and headed south.

6 thoughts on “Pinnacles to Perth, and a respite from tents” 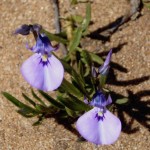