3 August 1999. The two policemen had been on duty since 3.30 am. There had been no sign of the madman who had been shooting up houses in the area a few hours earlier. Now it was past 9 am, and the sun was doing its best work. The heat haze was already warping the view north up the highway to Darwin. White striped bitumen, khaki olive bush and red dirt shimmered and wavered into the distance. South of the roadblock a long line of road trains an, cars and caravans grew impatient and irritated as they slowly roasted in the relentless heat.

Sergeant Glen Huitson and his partner, Constable Jamie O’Brien, has been roused from their beds in Adelaide River in the dead of night after shots had been fired at residents in the Darwin rural area, about 60 kilometres south of Darwin. They were ordered to set up a roadblock at the intersection of the Stuart Highway and Old Bynoe Road, less than a kilometer from the northern roadblock at Kentish Road, stopping all traffic moving through the area. The Tactical Response Group had been searching most of the night without any result, and it now seemed unlikely that the gunman would still be hanging around in broad daylight.

A couple of locals, waiting to get to work, wandered over to chat with the officers. Jonathon Anthonyszz leant against the bonnet of the squad car, and Anthony Hobden squatted nearby, talking to the officers. It had been a long night, but now in broad daylight, it seemed like there wasn’t much to worry about.

The first shot spun Anthonyszz off the bonnet and onto the ground. The policemen snatched up their weapons and returned fire, just before the gunman’s second shot tore through a gap in Huitson’s ballistic vest, and dropped him to the road. O’Brien kept up a hail of shots in the direction of the armed man who he could just make out across the road.

The TRG squad ran for their vehicles as soon as they heard the gunfire. The two vehicles swerved to a stop a few hundred metres away from the roadblock, and one clipped the other and rolled. The crash attracted the gunman’s attention, and he rose up onto one knee from his position in the grass, and swung his rifle around at the men scrambling from the rear of the wrecked troop carrier. Constable O’Brien suddenly had a clear shot, and took it, and the gunman fell.

It was the end of several things. It was end of the life of a fine young policeman, a man with a young family who was loved and respected in the small community of Adelaide River where he lived and worked. It was the end of the Crocodile Dundee story, according to the media. And it was the end of Rod Ansell, also a man with a family who loved him, and who had once been a national hero, a reflection of what Australia liked most about itself. Now he lay dead on the side of a road in the outback, his face in the dirt, his blood seeping into the hot ground, his body torn and blasted with shotgun pellets.

This is the story of my life with Rod Ansell, who had first captured the imagination of Australians when he survived for two months in 1977 on a remote river in the far north. Our relationship spanned twenty-two years, first as lovers, then spouses, parents, business partners and finally as divorcees.

How does someone go from being a person whose extraordinary story if survival in the wild inspired so many people to a psychotic, drug-crazed gunman who shot four people, killing one of them – a police officer – before being killed himself? It was the question asked by a lot of people when Rod died, and I am attempting to answer it here, or at least to shed some light on it. It may help people understand what happened to a man who could have been anything, and who had so much to offer, but who got lost along the way.

Maybe he was a captive of his dreams and fantasies, maybe he had some fatal flaw that no one could see or circumvent. He took a young girl from the suburbs of Melbourne to the outreaches of her existence, and made her life the most exhilarating, terrifying and awesome experience, in his own quest to find out what life was all about. What he didn’t understand, and didn’t learn, was that you don’t have to destroy life, or the people you love, to find that out.

This is a story of love, and how the people we love can have devastating effects on us that bear little resemblance to the effects of love. It’s a story about survival in more ways than one. 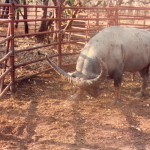