I grew up in Melbourne, eldest of six children. After working as a laboratory technician in marine pollution studies, I moved to the Northern Territory to be the radio operator at a remote Aboriginal community -  a six months stint that lasted two years and turned into a love affair with the NT.   Since then my jobs have included bull catcher, buffalo station owner, home schooling teacher, electorate officer for an Independent MP, boat hire business owner/operator, cartoonist, and mother of three children.

My first book, memoir Outback Heart, was published by Random House in 2005. It was followed by three children’s novels: Brumby Plains, Castaway, and The Secret of the Lonely Isles. Ronan’s Echo (2014) is my fifth book, and first adult novel.

After 8 years living aboard and sailing South East Asia and the Australian coast with my husband Lex Silvester, I now live in Darwin where I continue to write. I also teach creative writing workshops in schools, and memoir writing workshops for adults. And grow tomatoes on our second floor apartment balcony…! 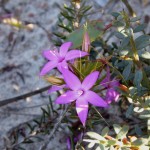