After a full three months meandering along the magnificent WA coast, it was time to turn our backs to the sea, and head inland. North.  We’d looked at the option of the more direct road to Belladonia, driving on some potentially deep sand tracks, but seeing we were travelling on our own, and had no experience of sand driving etc, we decided to stick to the black stuff.  And to tell the truth, after years of bull catching in the NT, the LAST thing I want to be doing for fun, is digging my car out of a bog, sandy or otherwise. Stopping for some last roadside wildflower photos instead, was just fine with me! 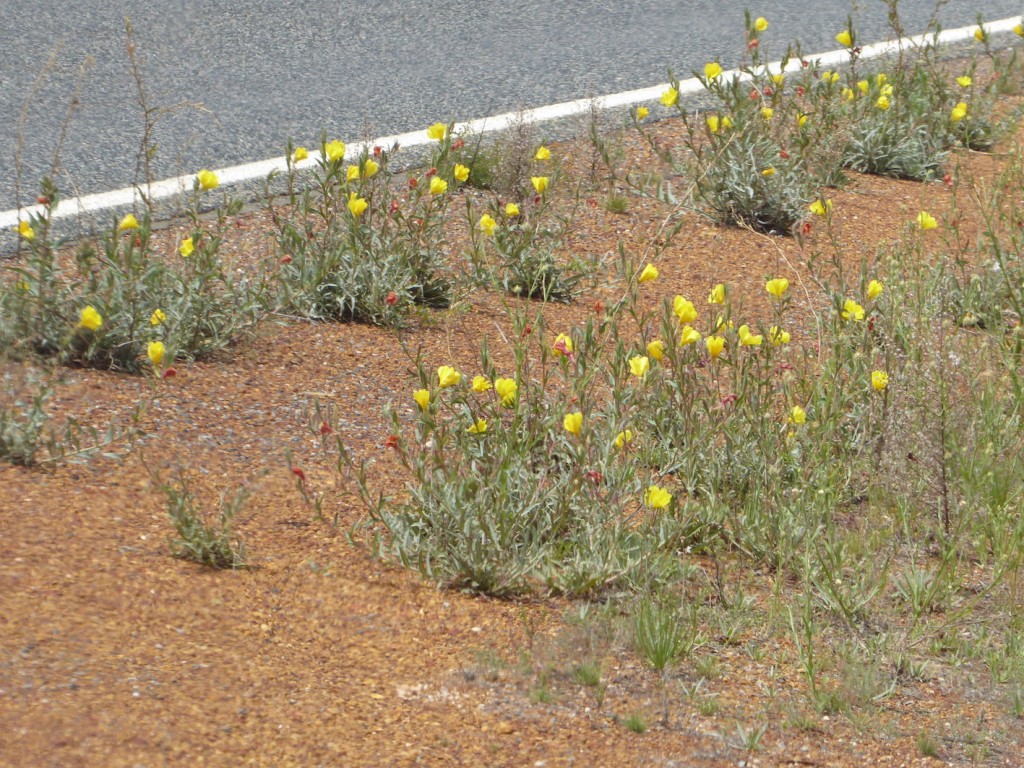 The less exciting route had its advantages. We headed for NORSEMAN, a route which took us through the quaintly named Grass Patch about 50 km north of Esperance. Grass Patch is tiny. The only shop, the Post Office/general store, was shut. However, there was a memorial on the other side of the road, in front of the giant grain handling depot, where we discovered that Grass Patch was home to one of Australia’s most famous Victoria Cross winners, Tom Starcevich, who was awarded the medal in WW2 for singlehandedly taking out two machine gun posts and capturing a heap of enemy soldiers. He raised his family here, and is buried in Esperance. 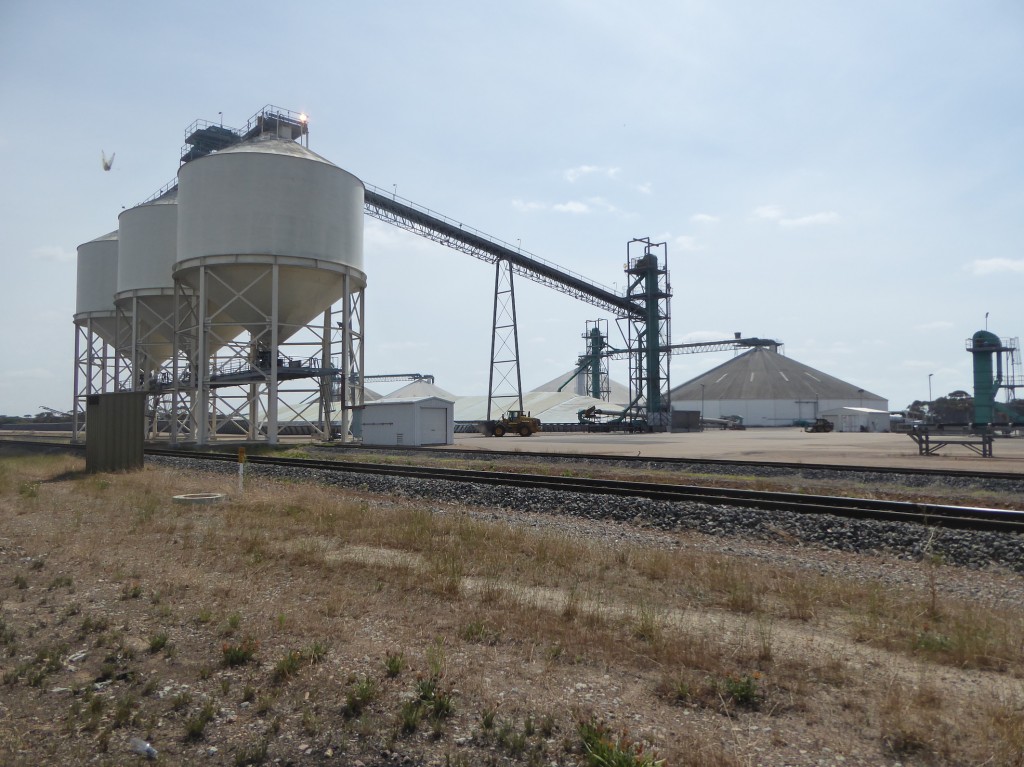 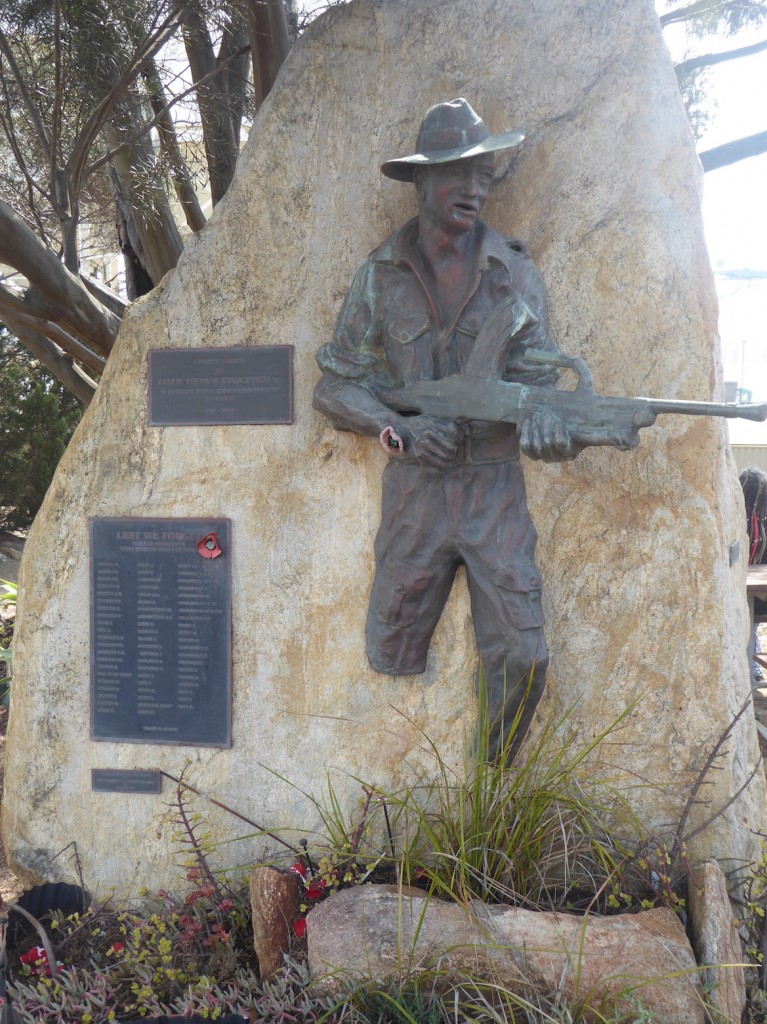 NORSEMAN sits at the intersection of the road to Kalgoorlie, and the road across the Nullarbor. Heading east, it’s the last town for 1200 km, and it’s named after a horse. One day around 1894 a man was prospecting in the area and camped for the night. The next morning his horse was lame, and when he inspected its hoof for a stone, he found a gold nugget, and the boom began. There’s a bronze statue to “Norseman” in the main street, and all the street signs have a little horse picture on them. But today Norseman is a city of empty houses. We chatted to a man in the main street, who told us, along with the gold finding story, that it used to have a population of over six thousand, but now only 500 people lived there.

‘You can buy a house here for under 10 grand,” he told us. “It all depends on the goldmine. When the gold price is up, the mine comes back to life, and when it drops, it shuts down and leaves the town to die again.”

One image that stays with me, was the sight of an elderly Australian man, a typical outback bloke wearing battered Akubra, jeans and work boots, having a friendly conversation with a young woman in the main street, advising her about something she was intending to buy. The arresting part was that she was dressed in full black niqab, with only her eyes showing, and they were standing outside the Thai café, which seemed to be the only thriving business in the town. Lovely intersection of cultures.

The country changed dramatically once we turned east. The Mallee trees that lined much of the road to Norseman now became much drier, lower scrub, and we passed some unusual roadkill – a dead camel. Happily we didn’t see its friends – they’d take some avoiding at any time.  As the country flattened out the trees took on a kind of weird Dr Suess look. 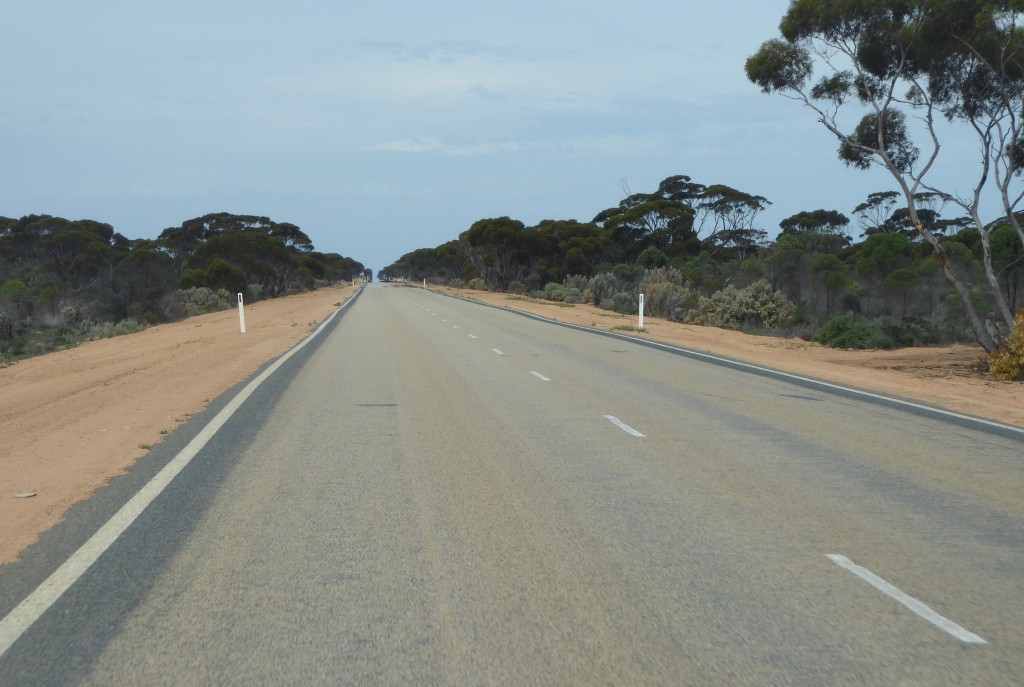 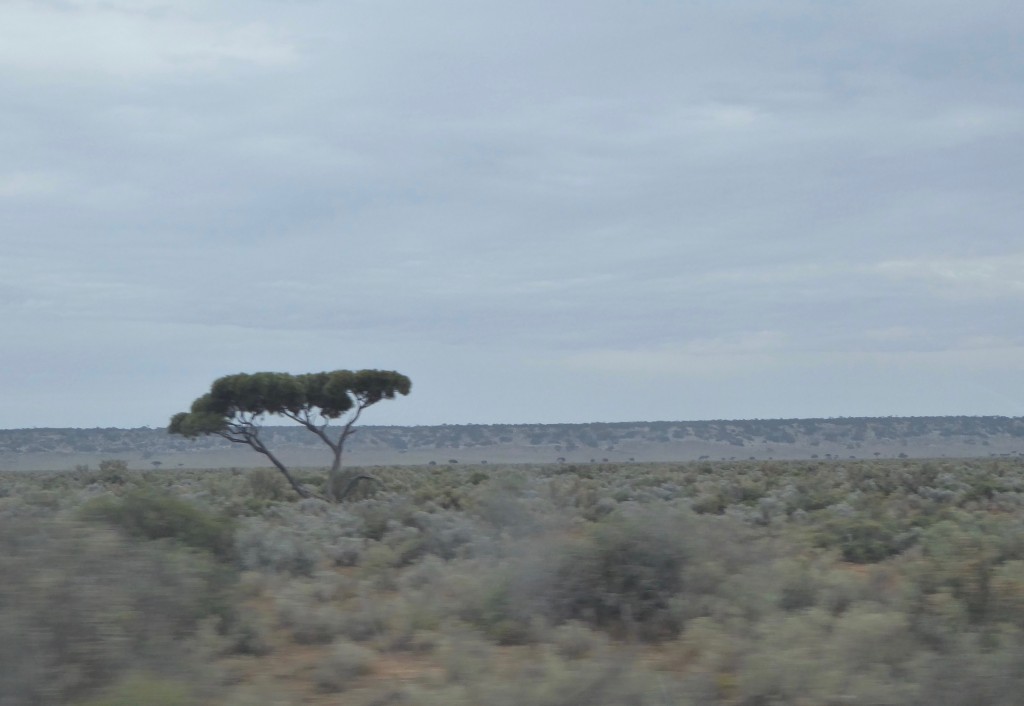 You could almost imagine herds of wildebeest and stalking lions out there.  Between Belladonia and the next spot on the map, is the road with no bends: 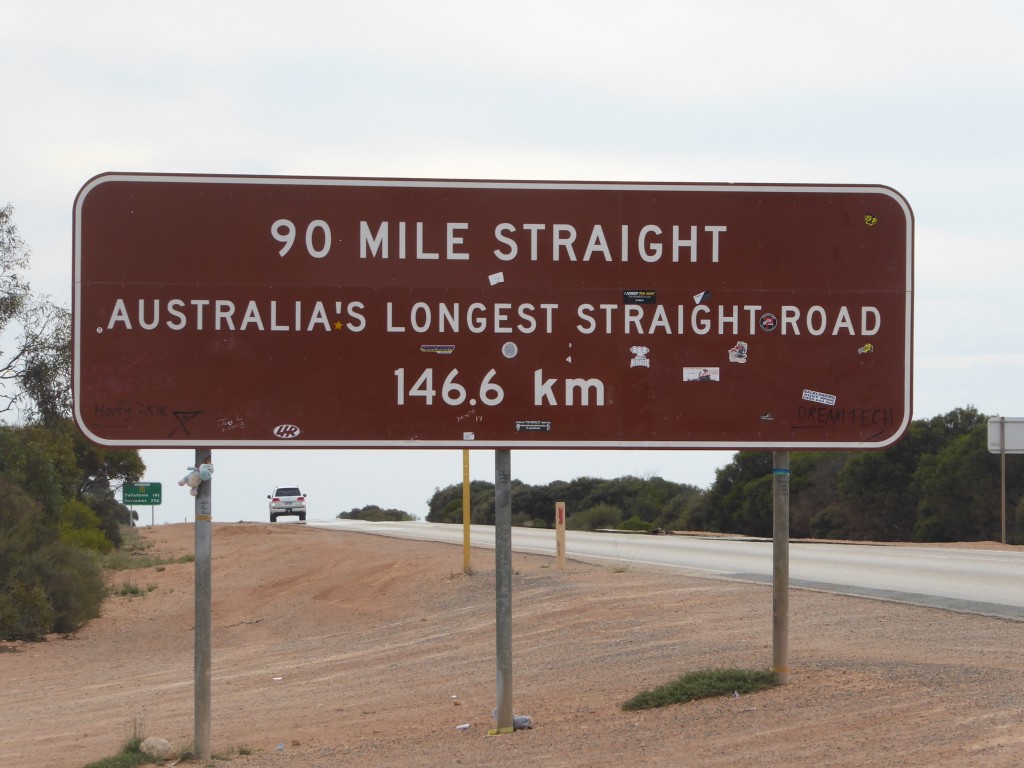 You avidly read signs when the country offers little else, and we pulled off the road to see what kind of blowhole you got this far from the sea… 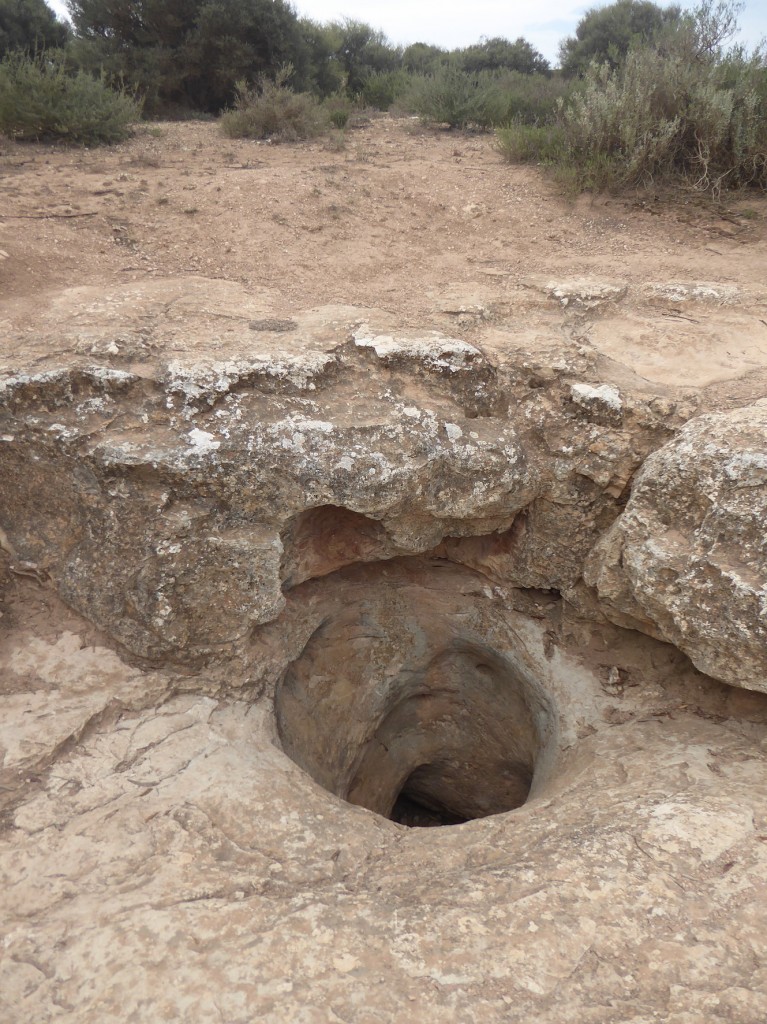 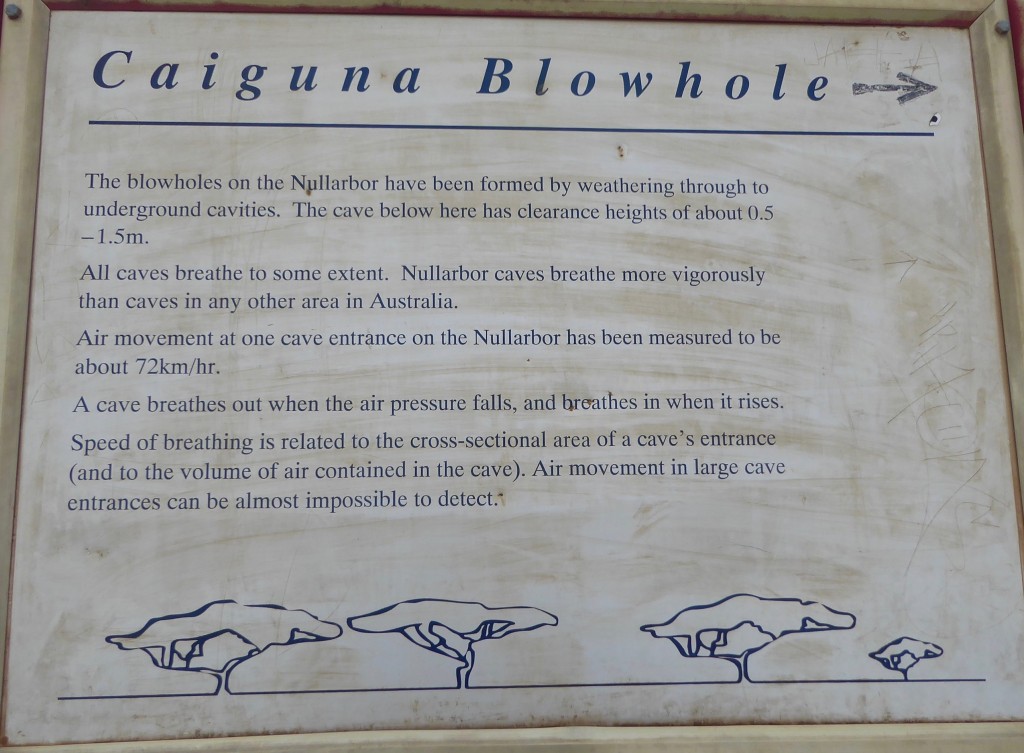 I was captivated by the notion of vigorously breathing Nullarbor caves!   From here we trekked on to the little roadside stop of Cocklebiddy. Most people who pause here only notice the fact that it is the 10th Hole on the Nullarbor Golf Course. But 50 km south of here is the Eyre Bird Observatory, which has recorded over 230 species of birds, including very rare migratory visitors all the way from Siberia. The Cocklebiddy Caves are nearby, and lay claim to the longest cave in the world – 6km. Most of it is underwater, suitable for experienced cave divers only – we didn’t investigate! But it’s amazing to consider what lies beneath that flat, dry, apparently uninteresting surface.

Our first stop next morning was Eucla, about 5km from the WA/SA border. The fuel price was about what you’d expect this far from anywhere. 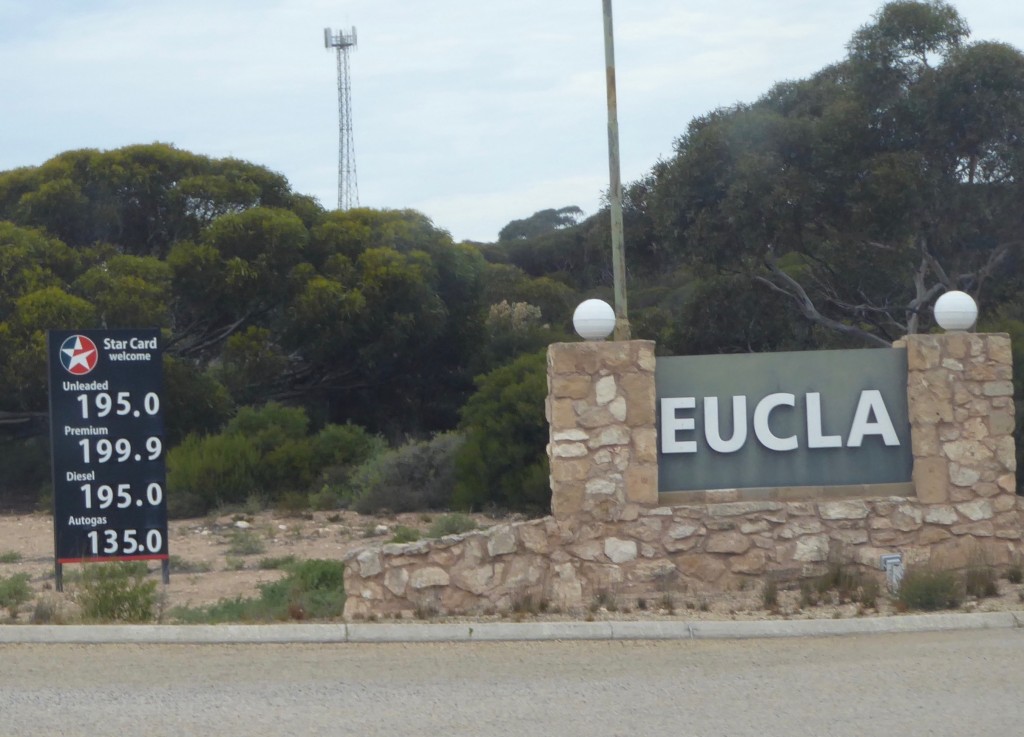 We wanted to find the Old Telegraph Station ruins, and wandered around the not-so-small complex looking for someone to ask. Eucla apparently has a motel, bar, cafe, campground and fuel shop but the only person we could find was a young man anxiously staring at a computer in the office. He spoke very little English. When we asked about a local map, he pointed to the small map of Australia on the office window and smiled hopefully. We conveyed that we were pretty sure we knew which country we were in, and found our own way by following some old signposts and a track towards the coast. 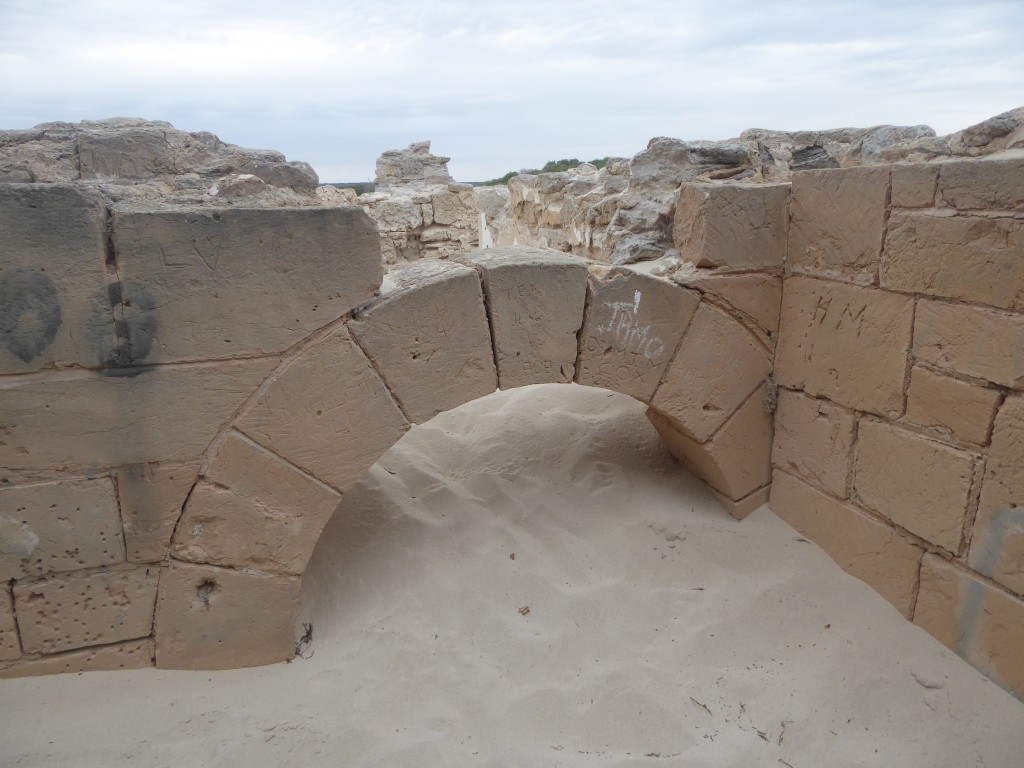 The Telegraph Station was established in 1877, finally linking Western Australia with the rest of the country by Morse code. The little town of Eucla grew up alongside it, and a 100 metre jetty was built close by at the coast. But in the 1890s a rabbit plague wiped out all the vegetation on the dunes, and the town was abandoned, being gradually engulfed by the shifting sand.  In 1927 the telegraph station shut down too, and joined the old town in its fate.

A little while later, paying for fuel and ice cream at Border Village, we asked the young bloke behind the counter what the story was with Eucla.

‘Oh mate, that’s the Zombie Apocalypse!’ he laughed. ‘You never see anyone there!’

Eucla, the town destroyed by rabbits. Or zombies…

He also gave us directions for taking the best photos of the Great Australian Bight. It was a dull day unfortunately, but the shapes are still the same, even if the colour’s not so dramatic as it can be: 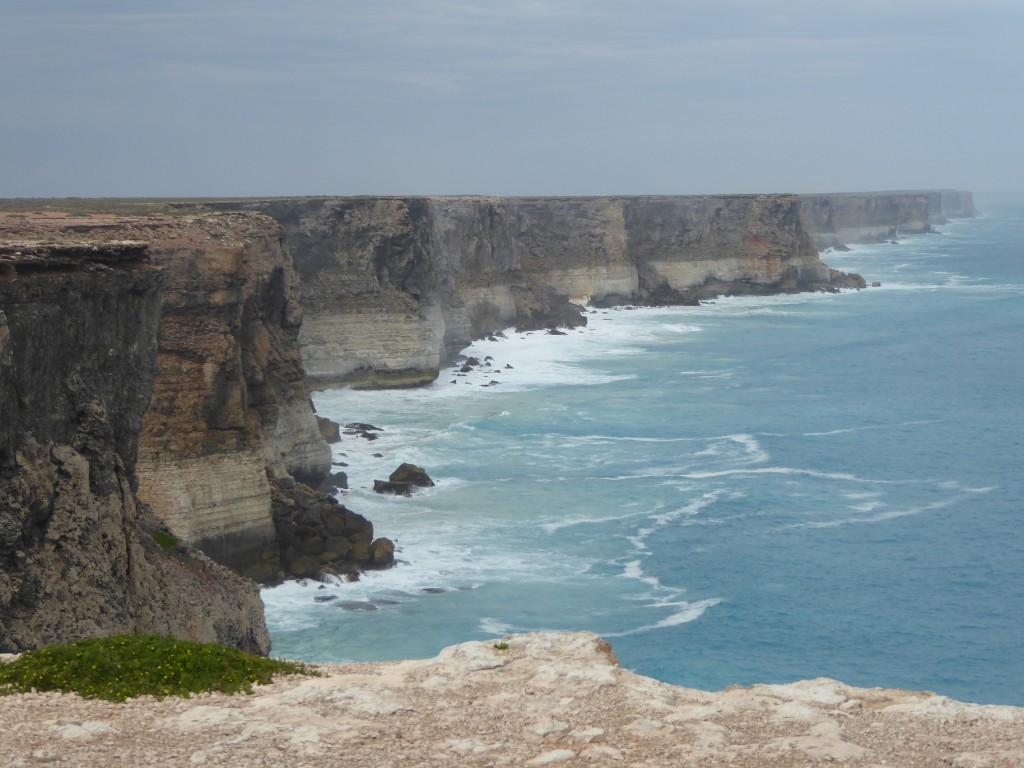 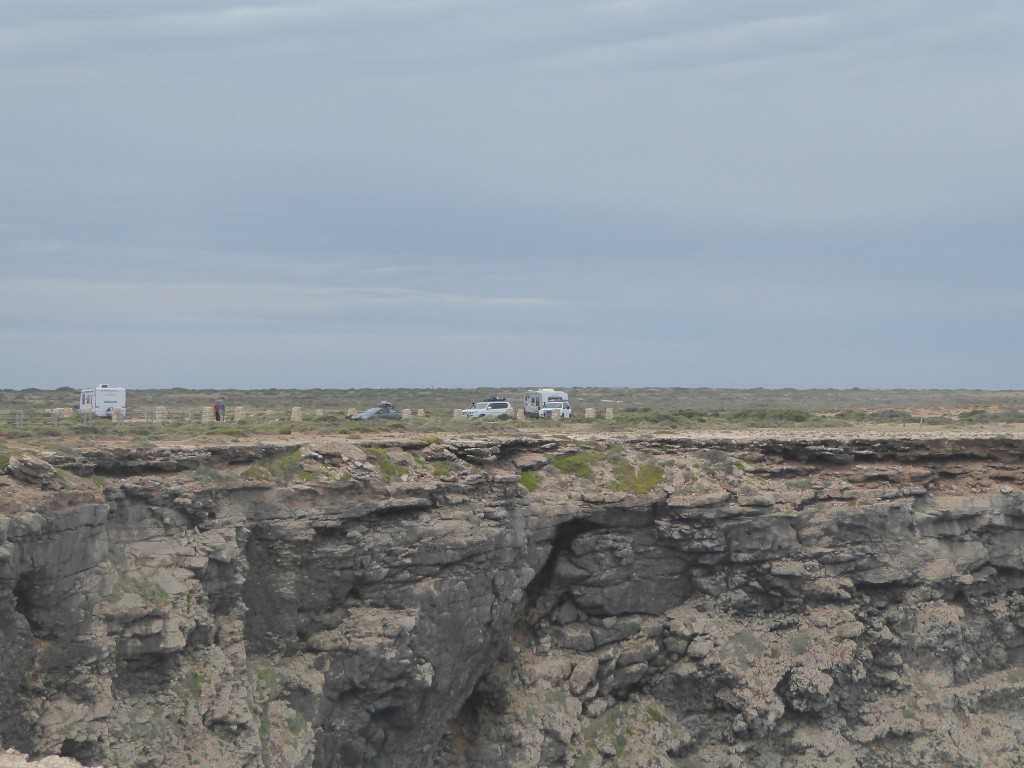 Standing on the extreme edge of the continent looking right and left along its underskirts, has to be one of the most awesome things you can do. It’s up there with balancing on the tip of Cape York, or watching the sunrise at Cape Byron. And yes, any beach around the whole coast is just as much the edge of the continent as this, but there is something about those raw ragged cliffs plunging 90 metres into the Southern Ocean that screams EDGE!!! in a way those other coastlines never can. 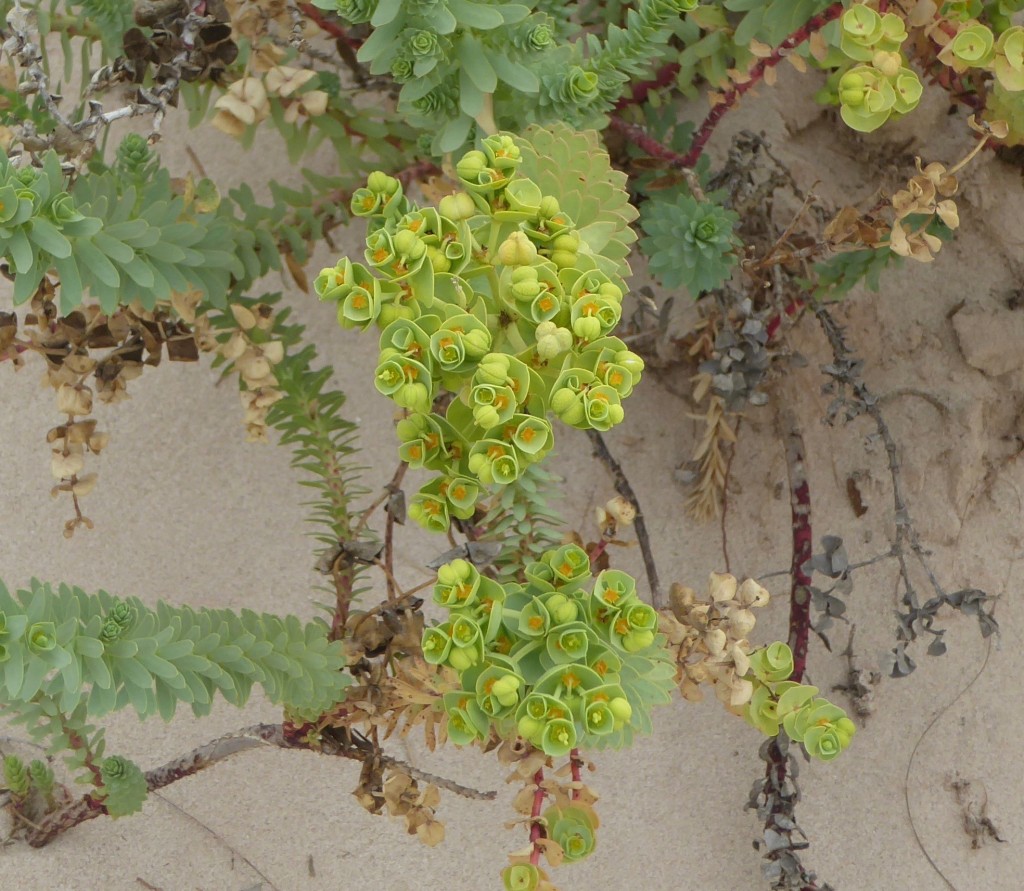 A final bit of greenery from Eucla – a bit the rabbits didn’t get. Unusual green flower-like structures growing amongst the ruins of the Old Telegraph Station.

And a note, before we leave Western Australia completely – remember Skylab? Esperance’s claim to fame – or one of them – is that it issued NASA a fine for littering, after pieces of Skylab fell on the town in 1979. And NASA never paid up! 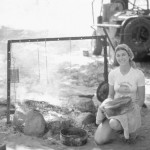